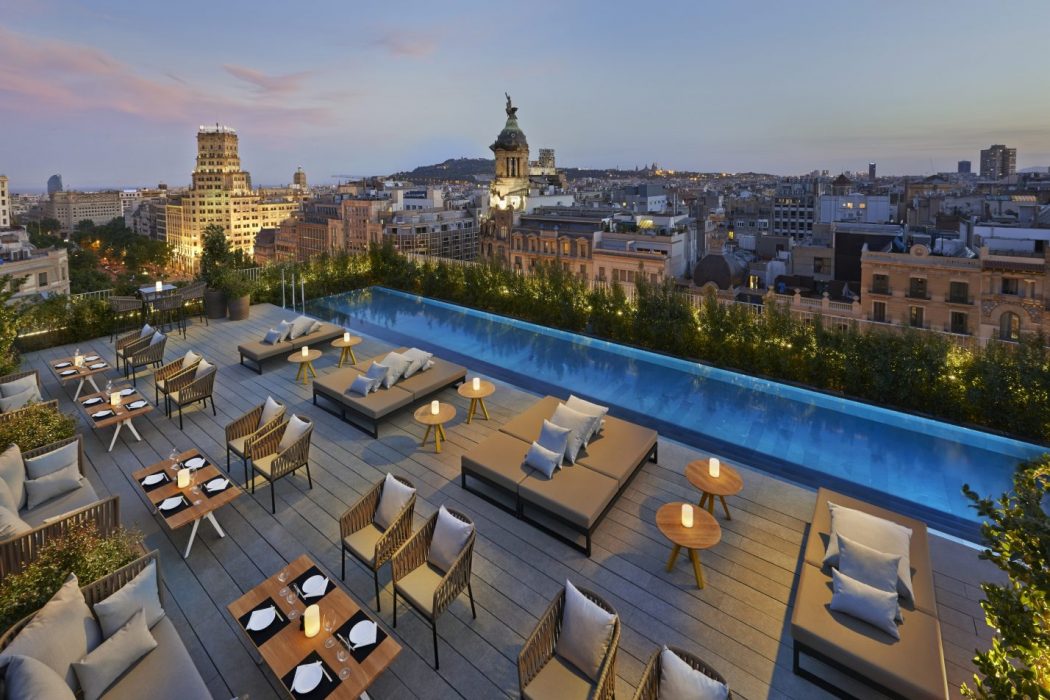 Facilities & Activities:
Mandarin Oriental, Barcelona provides a seamless blend of contemporary luxury and style. Experience the attention to detail and impeccable service delivered on a daily basis at this elegant hotel.
The Spa at Mandarin Oriental, Barcelona has eight private treatment rooms as well as two couples’ suites. Open 24 hours to inhouse guests, the gym is a state of the art fitness facility. Guests are provided with complimentary amenities including headphones, towels and chilled drinks.  Guest can relax by the open air dipping pool at Terrat, the hotel’s trendy rooftop retreat, where you can savor snacks and sensational 360-degree views of the city.  The restaurant, lounge and bar are contemporary spaces that mirror the artistic spirit and attitude of the city.

Rooms & Suites:
The Mandarin Oriental offer some of the most exclusive accommodation in Barcelona, with just 98 rooms and suites at this premiere address. Views are either over Barcelona’s most stylish boulevard, Passeig de Gràcia or to the hotel landscaped interior garden. A number of guestrooms have a balcony or terrace, from where you can admire the surrounding modernist façades.  Guestrooms feature 32” LCD screens in all bedrooms, high speed internet connectivity, video-on-demand and surround sound, more than 100 television channels, CD/DVD player in all rooms, three multi-line telephones, all with voicemail, selection of daily local and international newspapers, mini bar, twice daily maid service including evening turndown, individual controlled air conditioning, 24 hour room service, Bathrooms have large bathtubs or showers, and include a bathrobe, slippers and luxurious essential oil bathroom amenities by Aromatherapy Associates, and more.

Dining:
Moments – the 2-starred gourmet restaurant is blazing a trail in traditional Catalan cuisine by one of the world’s most acclaimed female chefs, Carme Ruscalleda. Banker’s Bar- A designer interior and art exhibit in its own right with a display created from the original collection of bank security boxes. BistrEauby Ángel León, located on the lower floor, is the heart of the hotel and offers Angel León’s cuisine in a casual sea bistro.  The Terrat rooftop is an exclusive retreat, located on the 9th floor where you have fabulous 360 degree views of the Barcelona skyline.

By continuing to use the site, you agree to the use of cookies. More information